⚡It’s ELECTRIC!⚡…..and when it detaches from the breaker with 💥sparks💥 it’s terrifying! There were multiple loose wires not properly secured/ tightened to the breakers.  Professional Home Inspectors can be on the front lines to prevent such damage. 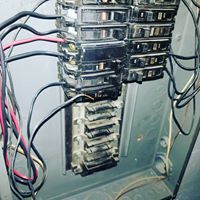